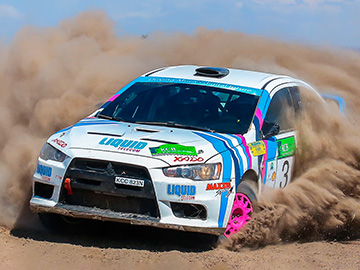 Tejveer Singh Rai will pilot the latest super car on Kenyan soil ahead of the new rally season which gets underway in Stoni Athi this weekend.

His new VW Polo R5, which is eligible to score WRC-2 points, will be among the cars to savor at this Sunday’s KCB Guru Nanak Rally. WRC-2 (formerly known as Super 2000 World Rally Championship or S-WRC), is a companion rally series to the WRC,  limited to production-based cars homologated under the Super 2000, N4, R5 rules.

The new drive marks the start of Tejveer’s spirited wait for the 2020 WRC Safari Rally which will kick-start the second half of the FIA global rally series in July.

Although no one knows what's up the sleeves of Tejveer, the premier class man is anticipated to call the shots behind the wheel of a state-of-the-art R5, by and large, the sixth to hit Kenyan gravel.

Tej, as he is amiably referred to as in rallying circles, will get his 2020 KNRC season going in a similar R5 contraption that his younger sibling Onkar Rai drove last season. Onkar won the 2019 season opening home event where he sealed an unprecedented hat trick of Nakuru Rally wins in the crowd-pleasing R5 Skoda Fabia. He later upgraded to a VW Polo R5, believed to be the fastest rally car on Kenyan soil at the present.

Other R5s to grace Kenyan gravel include Manvir's other Skoda which was later sold to Aaakif Virani, Onkar’s old R5 and Karan Patel's new Ford Fiesta.

Ian Duncan, the most successful KNRC driver with a record seven national titles under his belt, will be going for a record 12th Guru Nanak title in his Nissan Patrol and navigated by Tej Sehmi.

Behind Onkar are his Kabras teammates and KNRC champions Baldev Chager and Ravi Soni.

Izhar Mirza, who was relegated from Premier to Division One, will take off in 11th spot ahead of SPV Champions Nikhil Sachania and Deep Patel.

Nikhil is the only physically challenged driver on the KNRC front at the moment driving a hand-controlled SPV Mitsubishi Evolution 10. Ugandan Christakis Fitidis and his Rwandan partner Eric Nzamwita have also signed for the KNRC season opener in pursuit of East African Rally Challenge (EARC) points against Kenyans and his compatriot Nasser.

The revived regional championship will commence with Guru Nanak Rally in Kenya after which teams will traverse iconic regional events in the Rally of Tanzania, Rwanda Mountain Gorilla Rally, Uganda for the ARC Pearl of Africa Rally and lastly Burundi which will host its season-closer.