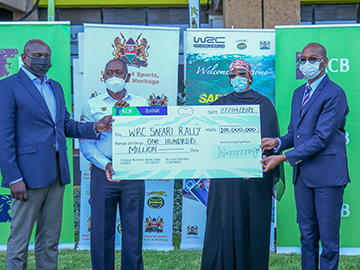 When Kenya's fabled Safari Rally was struck off from the FIA World Rally Championship (WRC) in October 2002, KCB Bank Kenya made a deliberate policy of stepping in to fill the void left behind by a sizeable number of corporate sponsors who had given the sport a wide berth.

WRC Safari 2002 was the 50th anniversary that the prestigious event was held, and it had been in the world championship since the series' inauguration in 1973.  In 2002, it was organized in just 10 weeks, following a shortfall in budget, and was rescued when the satellite communications company, Inmarsat, stepped in as the title sponsor.

And when the FIA axe fell on the iconic Kenyan round, KMSF was founded in 2002 after the Automobile Association of Kenya (AA) de-linked Motorsport from its core activities. KMSF returned to the drawing board in a bid to explore reinstatement possibilities.
One of the strategies for the campaign was to secure longterm corporate support to shore up the KMSF financial status.
Rightly so, KCB made its debut in motorsport by sponsoring the 2003 and 2004 Safaris in South Coast which was a move by KMSF to rope in the tourism facet into Kenya's spirited bid following relegation to FIA African Rally Championship (ARC) status.

The Safari then remained a preserve of then fancied Group "A" contraptions, which zoomed past remote villages in the South Coast with the roar of turbocharged contraptions treating villagers to done exhilarating displays. Revving off the sponsorship campaign in the coastal region also reaffirmed motorsports' enormous contribution towards domestic and international sports tourism which have remained key ingredients to the country's foreign exchange earnings. The whole reinforcement was geared at helping Kenya get back to the world map.

The first two events with KCB as title sponsors couldn't make it back to the WRC although it was discernible that a sense of excitement was already in the air.
One of the key gains. Over the years was the fact that KCB's long standing sponsorship enabled rally technology morph through different guises.
In line with the Bank’s strategy to spread its tentacles regionally, the first three rounds of the African Rally Championship (ARC) counted towards the newly created 2008 KCB East African Rally Challenge. With KCB around, motor rallying remained a key contributor to the growth of the Kenyan economy.

What's more, participants and contributors didn't only provide a market for essential goods and services across the country but also promoted domestic and international tourism which are key components in the economic activities in the country. From fuel supplies to motor vehicles, parts merchants, caterers and news vendors to consumers, the KCB KNRC is still a source of business and personal fulfillment to all.

Further, the Bank played a major role in bringing rallying to the public by nagging off events in their refurbished town branches across the country.

In 2005, KCB came on board as title sponsor of the then 9 legs of the Kenya National Rally Championship series. The following year, the Bank committed a three-year sponsorship package to race ahead with the rally-sport through to 2008.

Since 2003, the Bank has invested a staggering Ksh. 1.2 billion that has made them the single largest motorsports investors and indeed the longest running sponsors of the rally- sport in the country.

"Our involvement has been drawn for a number of years and I must say we are happy to continue with this exciting journey. Our ambition is to progress the Federation in building the high level of commitment and indeed the level of global rally events through the Safari. We are confident that the Ksh. 100million support for the Safari this year will enable the country to host a safe and successful Safari."

Safari CEO and KMSF Chairman Phineas has continued to extol the Bank for it's continued support which made Kenya's national series (KNRC) the best in Africa visavis events leading to the successful WRC candidature of Safari.

"I take this earliest opportunity to laud KCB.  If the Bank didn’t step up when we lost WRC status it would have meant that there was no Safari to revive or generally sell to WRC or FIA. In essence, KCB made sure motorsports was at its best in Kenya over the years. For Kenya to get back to WRC, it was not by fluke or favouritism. Kenya has been running the best ARC in the continent of Africa. Our drivers have been champions in the continent for the last five years and it's on merit that Kenya will be back in the summit of sport in the world."

SUMMARY OF EVENTS WHICH TOOK RACING IN KENYA TO THE NEXT LEVEL.

2021: KCB commits KShs.100 million in sponsorship towards the 2021 WRC Safari Rally Kenya which returns to Kenya and Africa after a long 19-year absence.