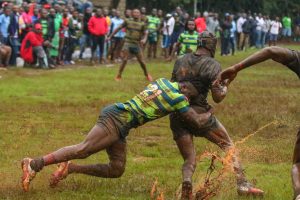 Still unbeaten and gearing up for the finals

First things first, let us get this out of the way. KCB Rugby team is through to the finals! Yaaay! On Saturday, Simba ariguruma and Impala faced the lion’s wrath again. We thumped them 15 – 0, and still, we are unbeaten!

Kabras is our next challenger. Make sure you catch the game this Saturday 24th at the den, Ruaraka.

Impala walikuja wakiwa full house. Somewhere in the crowd, we spotted the Resolution Insurance CEO, Peter Nduati. He looked super excited in the first half and so did the Impala team. End of first half let us just say their smiles were slowly fading away. We closed the first 40 minutes at 8-0.

Team ilikuwa more pumped up this time round. The weather got worse at some point (aki hii mvua!) There were a couple tactical changes in the team. KCB coach Curtis made his remarks saying, “The boys were more patient in the game, controlling the pace of the ball and their movement. They played well.” He was ecstatic about the zero score. You should have seen the fans screaming “Zerooooo.”

As the games get closer to the finals, crowds tend to become bigger. Kuna mafans die hards and wale wa kuanzia semi-finals, ni sawa tu. It was interesting to hear the screams, cheers and energy from the crowd. The weather had nothing on these fans, especially the KCB fans.

Asiye kubali kushindwa sio mshindani, ama namna gani? On interviewing the Impala coach, he gave kudos to the lion hearted team, giving them credit for adapting to the weather and gameplay better than his team.

Generally, the team came out stronger than the previous game. Mike Oleula and Darwin Mukhidza making the scores. See you on Saturday for the finals.

Leave us your details and we'll get back to you.